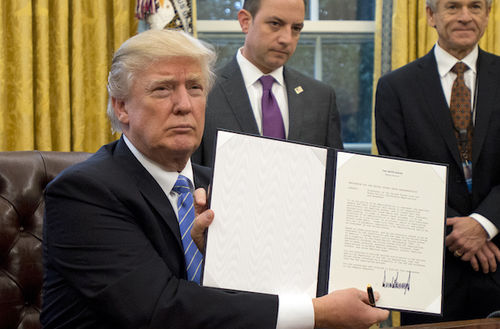 Supporters of the H1B visa program breathed a sigh of relief on Wednesday, as the non-immigrant work visa program was not included in his latest round of executive orders.  There were several orders signed that pertained to immigration, notably his plan to build a border wall between the US and Mexico, as well as plans to deport illegal immigrants in the US to their home country.  For now, the H1B program was left alone.

A Call for an Increase in Border Patrol and Immigration Personnel

One order that H1B visa holders should take note of is the increase in border patrol and immigration officers enforcing visa laws at every level.  What this means is that there could be increased scrutiny and questioning of even valid H1B visa workers arriving in the US for the first time, or returning from vacation.  The additional 10,000 immigration officers still need to be funded by Congress, but these steps do signal a change in immigration reform that many expected as President Trump took office.

Any H1B visa holder arriving in the US under this administration should be careful to have all of their documentation in order that supports their visa.  As we have pointed out in this blog, it is not unusual for H1B visa workers to be denied entry if they have conflicting documents or multiple copies of their resume in their electronic devices.  Border patrol and immigration have the right to access those devices when you cross the US border, and can take several hours to detain and question you at the airport.

What are Executive Orders, and How Can They Be Used to Alter the H1B Program

In the US system of government, the executive branch, which is primarily the President and his Cabinet, are charged with administering laws passed by Congress.  What this means is that the President cannot make law, but he does have some power to alter funding, enforcement and staffing of federal agencies.

This is why the executive orders by Trump are getting so much attention, since it signals how he will approach his policies.  The recent immigration orders demonstrate that he intends to fulfill his campaign promises on specific immigration rules in the US.  But, there are only a few H1B visa provisions that can be changed immediately by executive order.

Among those is the H-4 program that allows spouses of H1B visa holders to work in the US while accompanying their H1B worker.  Another is the OPT program which gives students under an F-1 visa the chance to gain work experience as a stepping stone to an H1B visa.  One element that could be changed is the amount of time a student has to use the OPT program.  These two areas are fairly tangential to the real target of H1B visa reform, which is outsourcing companies contracting out cheap labor to US companies.

Any significant H1B visa program changes would have to originate in Congress as a new law on the structure of the program.  Since there are already two new bills in the Republican-controlled Congress, a new law is likely this year.  The other role of the executive branch is the power to veto new laws, but as long as a new piece of legislation satisfies President Trump, he will not use this power and the law will be passed.

Keep an eye on our blog as we keep updating you as any events unfold that may impact the future of the H1B visa program.